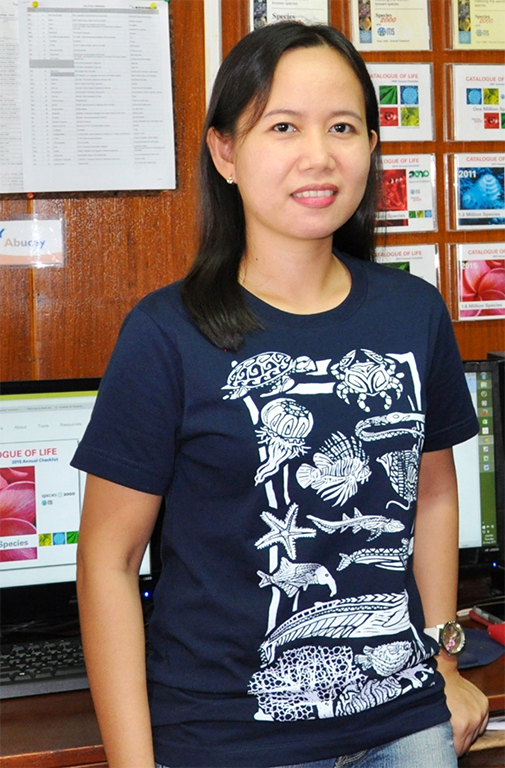 Luisa Abucay, also known as Isay, is a biologist with a master’s degree in food science who started working at the umbrella organization under which FishBase, SeaLifeBase and AquaMaps functioned, FishBase Information, Inc. (FIN), back in 2010.

Her job consisted of maintaining and assembling datasets for the Catalogue of Life (CoL), a comprehensive checklist of all known species on Earth that holds essential information on the names, relationships, distribution and environment groups for many species.

“When I joined CoL, the assembly team was composed only of two staff, Luvie Paglinawan and me. We were not encoding data for FishBase and SeaLifeBase databases but we were responsible for ensuring that FishBase was being updated in the CoL two or three times per year and included in the CoL Annual Checklist,” Isay said. “For SeaLifeBase that just started in 2005, we used CoL data to fill in the gaps for the non-fish marine species. AquaMaps, on the other hand, always used CoL Annual Checklists as the naming service which allowed users to be directed to the valid name of the species.”

After the CoL project ended in 2018, Isay started wearing many hats. She became a research analyst in FishBase and, besides encoding new species and other related biological information, she also began doing image analysis using Baited Remote Underwater Video Systems (BRUVS), carrying out CMSY analyses, and manual and semi-automatic catch reconstructions for FishBase’s partner project, the Sea Around Us. As of 2020 and up to 2024, she will also be working on a project documenting marine biodiversity through the digitization of invertebrate collections, a partnership with the Florida Museum of Natural History.

“I’m thankful that I was given the opportunity to acquire new skills and knowledge from other assigned work involving GIS, species identification, catch reconstructions and CMSY, new species, taxonomy and distribution,” Isay said. “For me, willingness to learn is a choice and there’s always ‘one more thing’ to learn. You learn something new every day if you pay attention to it.”

In Isay’s learning journey there have also been challenges which she has been able to overcome thanks to her own interest and efforts and the support of supervisors and colleagues. Two issues, in particular, have been pivotal points for her. The first one is arriving at the job with little knowledge on MS Access and species databases but being able to master both with guidance from Yury Roskov, CoL’s Executive Editor at the time, and nomenclatural codes such as the International Code of Zoological Nomenclature (ICZN). The second one is keeping taxonomic names in SeaLifeBase as current as possible, something she is able to do with the help of Patricia Sorongon, Emily Capuli and Nicolas Bailly.

But names are not always challenging, they can also be fun. Thinking about lighter moments during her time in FishBase and SeaLifeBase, Isay recalled making a query for a species named after her during her first few months in the CoL project.

“Voila! I found a few species in Mollusca, Arachnids, Insecta and even in Plantae. I also did that query in the SeaLifeBase and FishBase databases, I found two non-fish but nothing on fish species,” she said with a laugh.

Imagining the future of FishBase, SeaLifeBase and AquaMaps, Isay can only see them lasting forever. “As Darth Vader says: ‘The force is strong with this one’.”