The public at large and scientists who are not taxonomists share a view of taxonomists as hard to connect with and sometimes remote; this may apply to some of them, but as with everything, there are exceptions. One of these exceptions was Jack Randall.

John Ernest Randall was born in 1924 in Los Angeles, California. He studied at UCLA and then went to the University of Hawai’i, which he left in 1955 with a Ph.D. After various jobs in Florida and Puerto Rico, he became a Senior Ichthyologist at the Bishop Museum in Hawai’i (see Wikipedia), the position he held when he began his association with FishBase.

Given that he already was, at the time, the author of 10 books, over 500 scientific papers, and the person who described over 600 new species of fish, we were delighted when he accepted an invitation to an international workshop held in October 1995 in the Philippines. Jack (see photo) and other taxonomists verified the contents of FishBase and made constructive suggestions for its improvement. It is also when he decided to give FishBase access to a collection of over 11,000 underwater photographs of Caribbean and Indo-Pacific reef fishes he had spent decades assembling. 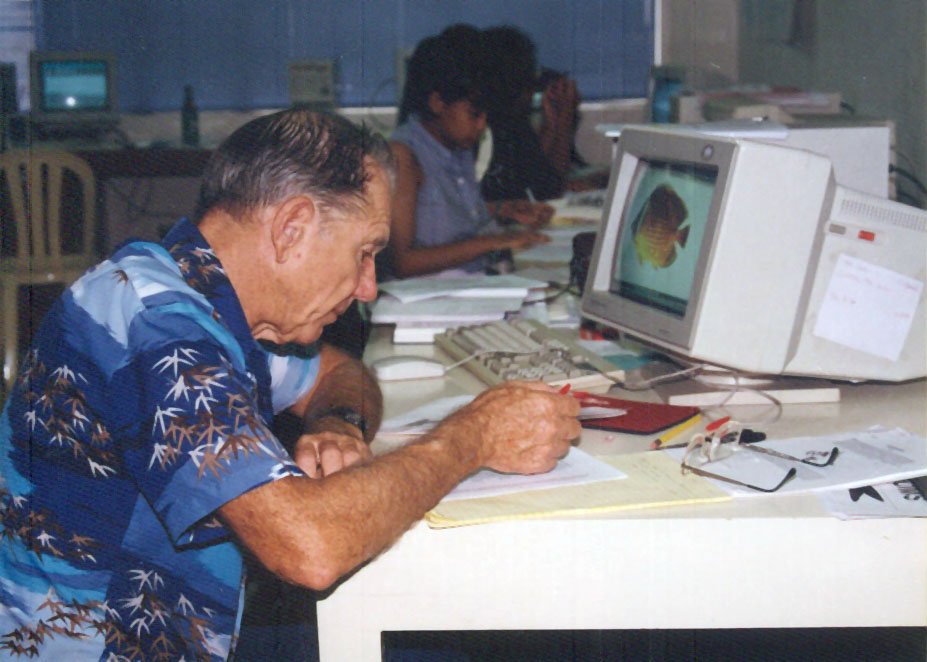 Jack Randall at an FAO/ICLARM/MSI/NORAD workshop held in early October 1995 in the Philippines, and devoted to the creation guide the fishery resources of the Central Western Pacific (see Froese and Pauly 2000, p. 13). Photo by Rachel ‘Aque’ Atanacio.

At the time, FishBase suffered enormously from a lack of fish pictures, most of which are copyrighted and, therefore, could not directly be incorporated as is possible with other content.  The situation was so bad that we resorted to scanning and showing fish stamps (which, in the process, made FishBase the largest repository of scanned fish stamps).  While we are now still missing photos for many species in FishBase, Jack’s gift and support of FishBase contributed crucially to its current near-universal acceptance.

Rainer Froese wrote: “What a role model; Jack is one of my heroes. I still remember how I was ‘schlepping’ his suitcase full of outdated photo-equipment through Manila airport, and how he gave a highly educational talk about taxonomy, showing slides of underwater photos in alphabetic sequence of the scientific names…”

Nicolas Bailly recalls: “I have seen Jack diving in strong current conditions in Durban during the 6th Indo-Pacific Fish Conference with his underwater camera of course. He was 77 then, and still continuing making underwater photos of coral reef fishes, his life-lasting pioneering and exploring activity. With Jack, a legend of coral reef fish biodiversity has passed. However, there is no doubt that his work will remain the foundation of much of ichthyology”.

Nicolas Bailly, incidentally note that as of early 2020, Jack has described 834 species of which 802 are considered valid. Given that further descriptions will appear posthumously (Richard Pyle, Bishop Museum, Honolulu, pers. comm.), Jack might beat the record of the Dutch taxonomist Pieter Bleeker (1819-1878), who has 837 currently valid species to his name.

In 1998, Jack was a resource person at a FishBase workshop held in Trinidad and Tobago.  He went diving among the reefs of Tobago with Deng Palomares who wrote “I remember how elated I felt when I was given the privilege of going on a dive with Jack Randall in Tobago (I have his signature on my dive log to prove it). He was on the lookout for a fish that exhibited perfect camouflage. I remember how graceful he was underwater and how quiet he swam in spite of all the hardware he was carrying while looking for the fish he wanted to photograph. A true naturalist transformed into a fish as soon as he hit the water! That was the epitome of my diving experience as a marine biologist, which I took and will take with me on each dive.”

I was on the same dive, and we observed how he patiently took many close-up photos of fish.  I remained in the background, marveling at how he could make such beautiful photos without flash. But when we surfaced, he exploded “[expletive], my flash didn’t work!” which shows that this famous ichthyologist lived in the same world that we all do.

This was also evident from an earlier story he told me about a South African ichthyologist trying to convince him to come work in South Africa in the 1970s, during the darkest days of apartheid.  He had a good sale pitch, Jack told me, but then the guy casually mentioned that, obviously, he could not bring his wife Helen along, because she was of Chinese ancestry….

Jack Randall was not only a fish taxonomist and an accomplished underwater photographer.  From 1961 to 1965, while a professor of Zoology at the University of Puerto Rico, where he wrote the classic on Caribbean Fishes (Randall 1968), he also tagged an immense number of fish and published his entire data set. This enabled their re-analysis, and the assessment that even a small summer-winter temperature difference (2 °C), affected the growth of fishes (Pauly and Ingles 1981).

Also, he published an extensive study of the food and feeding habits of Caribbean reef fishes (Randall 1967). Again, he made all his data available, and they were used by one of my first doctoral students, Ms. Silvia Opitz, to fill in the diet matrix for the most comprehensive ever Ecopath model of a coral reef (Opitz, 1996).  We also used Jack’s food and feeding habits study to guide us in designing the ‘Diet Table’ of FishBase, which now contains thousands of entries and has helped hundreds of colleagues parameterize Ecopath and other food-web models.

Ms. Emily Capuli, the FishBase team member who keeps track of new species wrote “I worked with [Jack] in Hawaii for a month and during the WCP workshop. I told him that he reminded me of Harrison Ford as the Indiana Jones character searching for new treasures and adventures, both in looks (when he was young) and career in life. […] He gave] us a lot of photos and references and have always been helpful. Every time and any time (literally) I wrote him for help, he answered my emails.”

Ms. Rachel ‘Aque’ Atanacio, who is the FishBase artist, and who therefore processed the many slides he donated to us, should have the last word. She described Jack as follows in a FishBase newsletter of 2017:

“Collaborator since 1990; main contribution: more than 11,000 fish pictures for 178 families, generously made available to the public under a Creative Commons license allowing the use of the images for non-commercial purposes. Jack, as he is fondly called by friends and colleagues, has been and still is a very active collaborator of FishBase. He has visited the FishBase team [in the Philippines] twice, once in 1995 and another time in the early 2000s, thus giving us an opportunity to work with him and benefit from his expertise as a leading authority on coral reef fishes.

Now, even at his advanced age, he is still very busy describing new species, writing and editing scientific papers, and ensuring that FishBase gets a copy of his latest paper and publication. Dr. Randall never disappoints and will answer whenever he is being consulted for his opinion on a fish ID. For these reasons, Dr. Randall will always be considered, not only as an invaluable collaborator, but a friend of FishBase.”

The entire Q-quatics team led by Dr. Mary Ann Bimbao sends a heartfelt thanks to Dr. Jack Randall. His work will be forever immortalized in FishBase.